On Saturday, February 16th, 2013, a group of intrepid adventurers gathered in the conference room at TechShop San Jose to explore “Life After Doomsday”

The day started as attendees signed in and got a custom laser-engraved namebadge. Improving on the terrific custom-made wood, acrylic, and dry-erase badges we innovated in 2012, these new badges are not just made from recovered materials, they are also reusable. 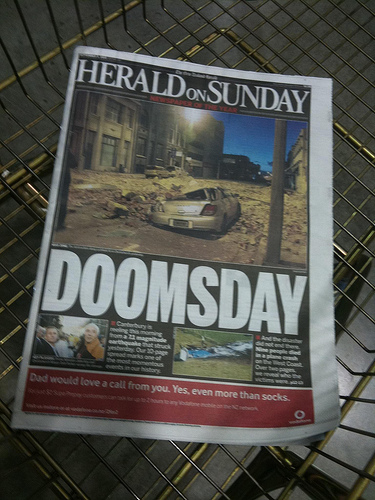 The badges are laser-engraved from a sheet of old dry-erase board that Gordon had kept in his garage since the 1990s. Each attendee’s name is laser engraved into the badge, in large, easy to read type. But instead of engraving the event name, date, and theme into the badge, these were printed onto low-tack stickers that were then stuck onto each badge. Attendees can choose to keep the badge as a souvenir, or they can peel off the stickers and use the badge for other events. For example instead of the generic slap-on “Hi, my name is…” badge at their next meetup, they can wear this laser-engraved badge. They can write on it with a common dry-erase marker to customize it for the event.

We had a variety of intriguing and satisfying donuts from Psycho Donuts across the street, and coffee courtesy of our venue, TechShop San Jose.

We then watched the following videos, discussing each one before watching the next.

At our lunch break we dispersed to several of the local restaurants, where we got delicious American, Indian, or Pizza, and brought it back to eat and chat.

After the final video we had a brief discussion of the favorite Doomsday scenarios we had started with, and how we felt about them now.

To continue on this path of study, try these:

Extra Credit:
Help save the world from Asteroids
• Ed Lu: The Biggest Conservations Project Imaginable
• The B612 Foundation
• Phil Plait: How to Defend the Earth from Asteroids (TEDxBoulder)