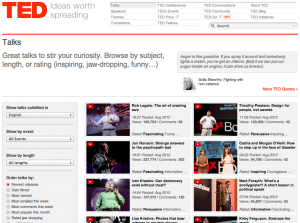 There are over 1,300 TED talks online. Combine that with more than 11,000 TEDx videos, (no, that’s not a typo), and the selection is pretty staggering. But have you ever wondered which TED talks get the most play? Well, fear not! TED has compiled a list of the 20 most viewed TED videos on their blog. Take a look at the link below and, while you probably won’t have time to watch all the talks out there, you can at least be sure you’re caught up the the TED top-20.